Cultivation for Healing and Growth

Felicity and Henré De Hart are the founders of Mishkan Ministries International (“MMI”).

MMI is situated on the farm Erkhamka on the banks of the Vaal River in the district of Parys/Vredefort, Province of the Free State, Republic of South Africa. Erkhamka is set in secluded and tranquil surroundings with a mountain and a river. The environment itself is conducive for the process of emotional healing and spiritual growth.  The facilities cater for individuals and groups of up to 14 people.

MMI is in the process of registering as a non-profit organization in terms of the statutes of the Republic of South Africa.

The following is a “short” story about how this ministry was conceived by the Holy Spirit and about the time of preparation for the birth of the ministry:

I (Felicity) was suffering from depression and had a tough time dealing with issues from my past. God helped me to find healing and intimacy with Him (that is part of the bigger testimony). Even before realising that I was destined for a complete meltdown due to depression I was searching God and looking for answers to deal with hurt and the healing of emotions. I did a course dealing with emotional hurt through deliverance and while I was going through this course I was focussed on the demonic influence in an unbalanced way. My depression became more pronounced and when my father passed away after suffering from lung cancer everything fell apart. Through the help of God and an amazing man of God I found healing for my broken spirit. I started looking for better answers for people dealing with emotional hurts. I knew that deliverance was one key, but it was not the only key – there is a dimension of taking responsibility and making choices that was not addressed in a course dealing with deliverance. I started studying counselling and asking God to show and teach me.

As I narrowly escaped being “psychiatrised” and medicated for the rest of my life, living with some kind of diagnosis/label, I was continuously being made aware of people that just can’t cope with life. These people land up in psychiatric hospitals, being subjected to all kinds of worldly treatments such as hypnotherapy, sleep therapy, drug therapy, etc. They are labelled and leave the hospitals with a pocket full of drugs to keep them “normal”.  My heart breaks for them because I know what the medication is doing. Don’t get me wrong, I am not against psychology and medication, but the medication is just dealing with the symptoms not the cause! Most people take the medication, feel better and keep on using it, but they don’t continue the counselling process to find the real cause of the problem. This is like putting a band aid and ointment on a deep festering wound. I got the impression that God was completely left out of the picture. I asked Him what He wanted me to do and did not get an immediate answer.

One day we were driving through the Free State with a friend and I am not even sure how the discussion started, but all of a sudden I got the thought in my mind and I spoke it out loud – I need to create a place where people can go to get away from the stresses of life and get in contact with the Holy Spirit so that they can find healing in Him. And because all these kinds of places are very expensive I would have to operate it on a donation basis. I still hear how God tells me that some people might not be able to contribute, but then one person will donate a huge sum of money!

Henré started looking at properties and I was in panic mode every time he came up with something. I was “waiting for God” to give us a place out of nowhere – falling from the sky so to speak! I was making excuses about why we shouldn’t be looking at properties. One day I just got the impression of God telling me that I must not stand in Henré’s way – that he needs to be looking to be able to find the place that God has for us. We sometimes looked at properties that were way above what we could afford but I just went along. God said He would close the doors if they needed to be closed, and He would open them if they needed to be opened. So, I decided to put my trust in that.

In November 2013 we ministered to a group of North African young people (ex-Muslims) that came to South Africa for a period to be taught the ways of God in a place where they would not fear for their lives before going back into their own countries, to reach others for Christ. We shared very quickly about our vision with them. One young man, Ali, heard this and decided to pray for us. The following was his vision from God:

“In the night of prayer I didn’t get any answer from God, but today when I was in the opera concert I heard the music of Beethoven and I remember your vision and I see a mountain and a big river then it was a big volcano in South Africa, then the fire was in Latin America like Brazil and Mexico and then the fire come back with people and they baptize in the river and then they walk to the mountain.”

In November 2014 I received a prophecy declaring that 2015 would be the year that things would be happening. We had been praying and waiting for about 10 years and I was carefully optimistic but more cautious about not getting my hopes up. I was actually starting to lose faith that it would ever happen. Not losing faith in God – just in me hearing Him. I was starting to think I was just dreaming up my own dreams.

To make a long story short, we were looking at properties and we came across a property almost by chance (although I don’t believe in chance – so I will say – by God). We arranged to visit the property. It is situated in the Vredefort dome which was added to the list of UNESCO World Heritage Sites in 2005 (I believe the volcano in Ali’s vision has reference here).

“The Vredefort crater is the largest verified impact crater on Earth, more than 300 km (186 mi) across when it was formed. What remains of it is located in the present-day Free State Province of South Africa and named after the town of Vredefort, which is situated near its center. Although the crater itself has long since eroded away, the remaining geological structures at its center are known as the Vredefort Dome or Vredefort impact structure. The crater is estimated to be 2.023 billion years old (± 4 million years), with impact being in the Paleoproterozoic Era. It is the second-oldest known crater on Earth.” (Wikipedia)

On our way to the property the estate agent said something to the tone of “the best thing about this property is that it has a mountain and a river” (see the vision above). Even before we got there we were sure that God was taking us to the place He has for us. We made an offer on the property and it was accepted. The price was within the range of what we knew the bank might approve. The whole thing just came together, and we even got a bond for 85% of the asking price, which is really a miracle for small holding and farm properties.

We moved in during December 2015 and thus started a series of traumatic events on this little farm. One day as I was really feeling down and out due to the seemingly never-ending trouble with water, finances, electricity, etc., I asked God if we made a mistake in coming here. I was again doubting that I heard Him correct. I was sitting in our little “cottage” at the foot of the mountain and God took me back through my journal of the past two years. I started reading the prayers I wrote to God and what He taught me since July 2013 for this ministry. I came to the journal entry of 19 August 2013 where I was pleading again with God to make this dream a reality and show us the way. On this day I drew a picture in my journal I believed God gave me for our place. The picture was a rough one (I am no artist) of a house with two roof tops at different levels. To the right of the house was a very tall tree and behind the house a mountain.

I forgot about this picture because as time went on I again thought it was just my powerful imagination. But on this day God told me to look around at the big house by the river and what I saw blew my mind. I will let you make up your own mind about this … (look at the pictures below). Suffice it to say that God gave me the most awesome confirmation. 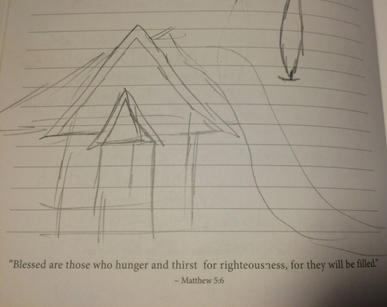 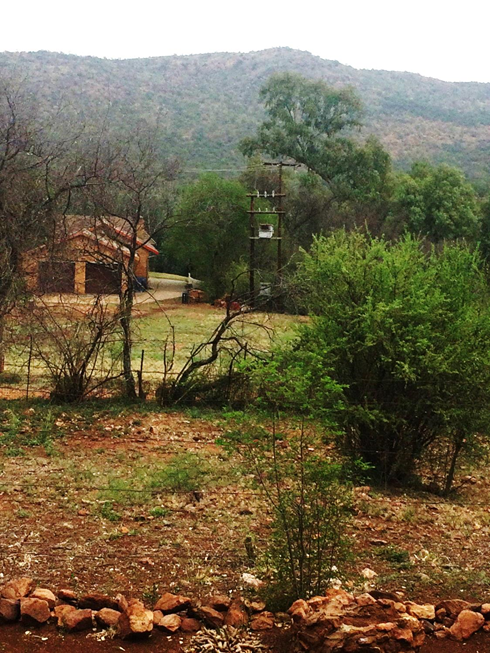 Chapter 2 of the Story …

On Sunday morning 24 March 2019, at the age of 59 years old Henré de Hart suddenly passed on to be with Jesus in his heavenly dwelling. The ministry continues as we honour him for the man of God he was.